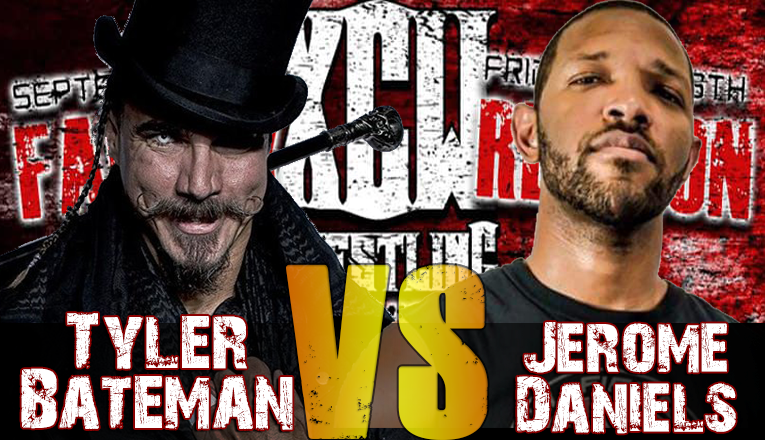 When XCW Wrestling said it was going to make Family Reunion one of the biggest shows in DFW, WE meant IT!

The XCW Wrestling ring has had some of the biggest stars in the business step through its ropes. We could name guys like Axel Rotten, Dr. Death Steve Williams, Three Minute Warning Rosie, Manny Fernadez, Ted Dibiase, and Terry Funk. All of these legends of wrestling came to XCW Wrestling with their passion and knowledge and their names. We were honored to have been a stage for these great men. But XCW Wrestling wasn’t just a place where big names came. It was also a place where the names of tomorrow would begin to break their laces in. It was a place where young talent could be seen or groomed by bigger names and veteran workers. The King of the Crossroads was one of these young men, and today is one of the most sought after talents in the nation.

Tyler Bateman started his traveling back in the early 2000s and quickly found his way to the XCW Wrestling Arena. There he found a stage and a group of veterans that would coach and encourage his talents. It gave him a foundation for working the road. Back then, Tyler was a young man with a huge smile and a wave to the crowd. But all has changed, and the man he has become is internationally known. He’s worked with some of the top men and women in this wrestling business all around the world. On September 13th, 2019 Tyler Bateman comes home to XCW Wrestling Presents Family Reunion at the Denton Civic Center.

Tyler is as “old school” as they come not only with his Roots in XCW Wrestling but also in his fighting. He’s found a dark side that will be hard to tame. The XCW Wrestling Office has considered many options, but there is one man that like Tyler has changed and brings a dark side of his own. Jerome Daniels, better known in XCW Wrestling as the Flawless one. He was an influential member of the Big Time Players. He is a multi-time champion in XCW Wrestling. Although his intention was never to be loved in XCW Wrestling, he quickly became part of the XCW Wrestling family. He brought a confident attitude that made you love him even though you didn’t want to. Jerome Daniels, like Tyler, found another side of himself. He’s not only wrestling all over the nation he booked for tours in other countries, but wresting isn’t the only sport in his current life. Jerome picked up Jujitsu and Muy Thai Kickboxing as a hobby. Due to his competitiveness, he quickly climbed the ranks in both sports. When he’s not wrestling, he’s fighting in a ring winning tournaments all over the country.

At Family Reunion, New School meets Old School when The Flawless One Jerome Daniels will step into the squared circle against The King of the Crossroads Tyler Bateman. The Stage is set! You can bet that forearms and elbows will be traded like $2 stocks, by the plentiful!

Tickets are on sale now at
https://xcwprowrestling.com/product/family-reunion/